The Joy of Christmas!

It's been a hectic week for us. My cat, Mr. Darcy, gave the hubby and I a scare. We found him under our bed unable to walk, move his head, and his eyes were bouncing around. We thought he had a stroke (but he's only 3 years old). When we took him to the vet the next morning, the vet old us it was Idiopathic Ventribular Disorder and he would be fine in about 10 days. PHEW! Mr. Darcy is almost 100% recovered, but when he shakes his head he still falls over.

So, after that little scare, we had to focus on preparing for our guests for Christmas. Yup, on Christmas and Thanksgiving I play Suzie Homemaker and I make dinner. Our new Christmas tradition is to have Turducken. 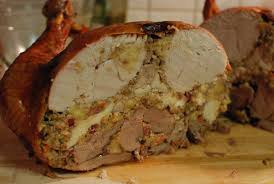 ﻿Have you ever had turducken? It is AWESOME! It's already prepped so you don't need to prepare anything. You just take it out of the box, put it in the roaster, and you're good to go! I highly recommend it!

It was so much fun having my grandparents and my two friends over for Christmas. My friends are actually Jewish, so we celebrated Christmakah at my house this year!

I've been trying to keep up with my Advent resolution this liturgical year, which is saying the Chaplet of Divine Mercy every day. I've forgotten it four times so far, but I've made them up by saying it twice the next day. However, it has already come to the point where it feels like a chore to do everyday. I don't want this to feel like something I just have to get through. I think I need to rethink my method and maybe introduce some kind of Lectio with it.

The next thing I need to do is drag my hubby to see Les Miserables. I am so excited to see this movie! When I was a kid, I would play the 10th Anniversary Show over and over again and sing along. This musical really kindled a love of music inside of me. So, this show means a lot to me. The hubby, on the other hand, hates musicals. I am hoping that maybe the movie edition will show him what the story is all about in a manner he can connect with.

Alfie Boe did the greatest rendition of Bring Him Home during the 25th Anniversary Concert. It still brings a tear to my eye! I know Hugh Jackman won't be able to top it, but I'm still excited!﻿
Posted by Unknown at 9:26 AM