I really did not want to get involved in they hype of the wedding of Prince William and Kate Middleton. I didn't even watch more than 2 minutes of the wedding. And personally, I kinda got sick hearing of it. I know it is a special occasion and we don't see princes and princesses getting married every day, but to me the pomp and circumstance of such an occasion can sometimes be too much.

However, there are just a few things that I want to comment on. First off I need to give Princess Kate Kudos for choosing a beautiful, simple, and modest dress. Her dress was designed by Sarah Burton from the House of Alexandre McQueen and it is very Grace Kelly-esq.
﻿
I simply LOVE the long lace sleeves and the train was not enormously long like Diana's was. There is some debate in the 'modesty' world asking if Kate's dress can really be considered modest because the v-neck is a little on the low side. However, I have to agree with Rebecca from Modestia, saying that Kate is a rather skinny girl and she does not have a lot of boobage going on, therefore cleavage was not an issue. So, I say, that Kate's dress was modest!
Pippa, her sister and maid-of-honor, also wore a beautifully modest wedding dress. I could hear the gasps of the conservatives when she stepped out of the car wearing an ivory dress, because nobody is supposed to upstage the bride on her day, but no doubt Kate helped choose the dress and if she wants her sister to dress in ivory, then I say go for it! Diana's maid of honor wore ivory at the wedding too. Maybe it is a British thing?Pippa's dress was simple and elegant and did not overshadow Kate in the least!
Also, from what I understand, Kate did HER OWN MAKE-UP! Now that takes some courage! Apparently she wanted William to recognize her on their wedding day. So, I have to give Kudos to Princess Kate for dressing modestly and not over-doing it on the make-up. We have yet to see what she will do as princess, but I think this will begin a new era on wedding dresses with sleeves, which I will be very thankful to see!﻿
Now, all of this wedding dress talk makes me want to comment on my experience shopping for a dress. As we all know, the trend going on now is sleeveless wedding dresses, or dresses with a 'tube-top' style. Three years ago, when I first got engaged, the first thing I did was buy a wedding dress.
There is one thing you need to understand. At the time, I was not a practicing Catholic, and we did not have any intention of getting married in a church. But we planned to have a small wedding of no more that 50 guests at a B&B. You know, something small and simple. I am a simple kinda girl and I don't really want extravagance. So, I bought a simple dress, with no straps, sleeves, or even any lace or sequins. It was ivory with a little ruching on the side and no train. It cost me $250 from Davids Bridal and I was very happy with it.
After my fiance proposed to me, the economy went in the tanker, so we postponed our wedding and we will get married before the year is out. Now that we are devout Catholics and want to be married in the church, I decided to get a new dress, something a little more dressy than the one I originally bought because my fiance and the groomsmen will all be in full Scottish Kilt regalia, and they will look dressier than I. And I, like most brides, want to be the focus on my wedding day. Since I could not have my future husband look nicer than me on our day, I decided to get a new dress and he supported the idea.
Almost immediately, I wanted to find a modest dress, something that at least had sleeves. But that was more difficult than I thought. First off, there is very little selection in my area, and I hesitated to buy something online without trying it on. I also wanted to stay away from discount online bridal shops because most of those dresses are made in sweatshops in China. I did not want to spend a lot on a dress because it is something I will only wear once. Personally, I think it is ridiculous to spend thousands of dollars on a dress, very vain. So, I set my budget at $750 max.
Since there were very few wedding dresses with sleeves to chose from, and most 'modest' dresses tend to look very frumpy, I thought that if I go with a sleeveless dress, I will purchase a lace bolero to cover my shoulders during the ceremony, I will be in front of God after all! Since I wanted to see dresses at a place other than David's Bridal, I tried a small bridal boutique outside of Frederick, MD. The reason I went there was because they actually posted prices on their website. I don't have time to go from boutique to boutique to try on dresses out of my price range. (I am a very know-what-I-want kind of shopper, but not in a bitchy kind of way...I don't think.) The boutique was quaint, but did not have a lot of selection and I just did not find 'the dress'.
So, I went back to David's. There I tried on about 6 dresses, some with sleeves some without, and I settled on an lace ivory and champagne dress with capped sleeves and a small train. I have to admit, this dress looked so stunning! My friend and fellow classmate who works at David's, Joey, just had to come up and tell me how beautiful I looked! (Joey, you're the greatest!)  I am a very fair red-head, so the colour worked very well with my skin-tone. Also, it was within my budget, $724. Paired with a beautiful mantilla veil, I will certainly look beautiful on my wedding day! 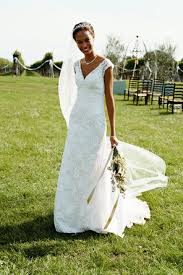 I may not have long sleeves, but at least my shoulders will be covered. However, I am still debating on whether or not I should get that lace bolero for more coverage at the ceremony. Any thoughts?
I was flipping through the channels the other day and for lack of anything else on, I settled on Say Yes to the Dress, which takes place at Kleinfelds in New York City. Of course everything in NY is expensive and they sell designer dresses, so they tend to be very pricey. One woman, who was getting married in a church, chose the most horrific and revealing dress I had ever seen. 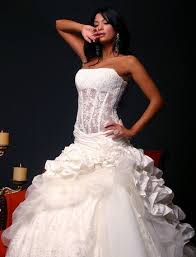 Notice that the bodice is practically see-through! It also laces up the back like a corset with no modesty panel. The bride to be bought the sample dress without her mother seeing it. So, when she brought her mother to back Kleinfelds for her fitting, and the dress was revealed, the mother's jaw practically dropped to the floor! "You remember that you're getting married in a church!" she exclaimed. So, the mother insisted that modesty panels be added to the bodice, and the neckline be brought up a bit. Luckily, the mother had some sense because this bride was getting married in the Roman Catholic church! (I think it was St. Patrick's Cathedral in NYC.)
Why would this Roman Catholic bride have little sense of modesty? Why would she think it is ok to practically bare your midriff at the altar while saying vows before God?
I know that the Mormons have a dress code for those entering the Temple, and they require that wedding dresses have proper sleeves and a modest neck-line. There are thousands of 'modest' wedding dress shops in Utah. In fact, I was tempted to buy a dress online from a shop outside of Salt Lake City. But I just could not bring myself to buy it without trying it on.

I sincerely hope that Kate Middleton's dress will have an impact on the wedding dress market and hopefully sleeves and modest dresses will be brought back into the fold with ﻿beauty and grace. Hopefully, it will be a trend that lasts!
﻿
﻿
﻿
Posted by Unknown at 11:32 AM