Today is a very special day, for two reasons, as any Catholic should know. It is Divine Mercy Sunday! Christ revealed to Saint Faustina that those who receive confession and the Eucharist on this day will receive a plenary indulgence. He spoke to Saint Faustina about the deep deep pool of His Mercy and how He wants to wrap all of man kind in his love. I have said the novena for the past 9 days and will be going to Mass today where I will venerate the image of His Divine Mercy and recite the chaplet before Mass.

Also, today is the Beatification of Pope John Paul II. This has caused some controversy because some people think he did not take action in the light of the scandal. However, there is one thing people need to understand, being a saint does not mean one was perfect while on earth. John Paul II grieved when he learned what was going on and ﻿tried to take action. Unfortunately, it doesn't seem that all of the bishops and cardinals took heed of his command.
John Paul II was a great man and he is a role model. I think all popes in the future will be compared to JPII who it seems has set a new standard. 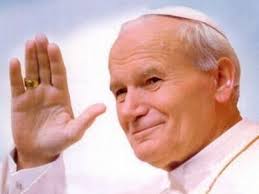 Blessed John Paul the Great, Pray for Us!﻿
Posted by Unknown at 8:49 AM