Falling in Love with Therese 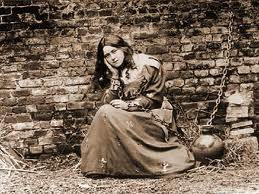 Saint Therese of Lisieux, she is probably one of the most revered saints in all of history. I, however, have not felt the same kind of affection towards her as most people seem to have. I read The Story of a Soul and found it to be extremely annoying. The sugary language was such a turn off. Therese seemed to be a pretty spoiled child who was almost always happy, except during her period of illness in which she described such horrible sadness. You know how some people who have natural bubbly personalities can sometimes turn you off, that was how I felt with Saint Therese. Too happy for her own good.

About six months ago, I decided to read more about her. There just HAD to be more to this saint than what was on the surface. She was loved by millions because of one awful book she wrote. (I know that many people love The Story of a Soul, but I am not one of them.) So, I downloaded a book to my kindle (one of the greatest inventions EVER!) called The Hidden Face of Therese by Ida Friederike Gorres. It really opened my eyes to the life that Therese and her sisters had. I developed a fond affection to her mother, Blessed Zelie Martin.

The reason I was so drawn to Blessed Zelie was because I was searching for married female saints that I could try to imitate in my life. The VAST majority of canonized saints were religious. As a married woman who is trying to live out my vocation with God, I wanted to find a role-model. Zelie was the role-model I was looking for. A woman who was married, had children, and even had her own lace-making business, which was pretty unusual for a woman in her day.

Gorres' book shed more light on Therese, she wasn't all sugar and flowers like her autobiography portrays her to be, and I developed a respect for her. But that respect did not turn into the love that most people seem to have for the Little Flower.

Recently I have been questioning my life and my calling as a married woman. I work a pretty dull job and I have become less and less career minded since my reversion to the Church. I am a married woman and we are trying to have a family. My family will always come first, not my career. So, I am wondering how to bring a certain amount of happiness to my uneventful life and how to make an impact on the world. (That is part of the reason why I started a blog.)

While I was (for lack of a better term) meditating on my life, I all of a sudden realized that I did not have to live an exciting life to receive fulfillment. I looked to Saint Therese, a woman who entered Carmel at the age of 15 and died at the age of 24. It is said that her fellow nuns found her to be somewhat unremarkable and they wondered what the mother superior would say at her funeral when she was on her death-bed. Because, after all, she had accomplished nothing during her life on earth.

It was that sugary little autobiography that shone a spotlight on her life. If she did not write that book, then she probably would have been forgotten here on earth. Here she led a life that was not full of excitement, she was not a heroic martyr (though she wanted to be), she was a quiet nun who had daily duties. Kinda like me. I get up, go to work, come home, make dinner for the hubby, and spend time with him and the kitties.

Despite her seemingly unremarkable life, Saint Therese has become one of the three female Doctor's of the Church. That is a remarkable accomplishment.

I must have been thinking about her last night because she infiltrated my dreams. (I am not saying she appeared to me in a dream, I am just saying I dreamt about her.) Waking up from that dream has led me to look at her in a new light. So, I can now come out to say that I have fallen in love with the Little Flower.

Saint Therese, Pray for Us!﻿
﻿