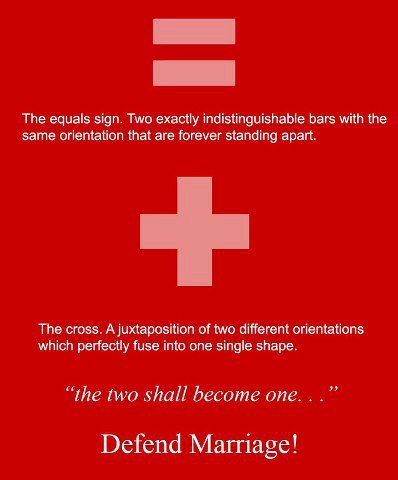 If you are on Facebook, I am sure that you have seen the plethora of equal signs that are popping up everywhere. Those who wish to redefine the definition of marriage are out in full force.

Honestly, those of us who support the traditional definition of marriage should not be surprised. Society has already redefined marriage years ago. It started with the Council of Lambeth in 1930 when the Anglican church approved birth control in 'limited circumstances'. Gradually, the acceptance of birth control would grow until is became perfectly acceptable for married couples to use contraceptives to space or avoid children. Slowly, marriage stopped being the building block of life.

Also, in an age where people change spouses almost as much as they change their underwear, the permanence of marriage has also diminished. Over 50% of marriages end in divorce. The most common reason? Irreconcilable differences. My spouse and I no longer have the same feelings for each other when we got married, so I can go find someone else.

Well, when I got married, I promised to stay true to my husband no matter what. I vowed this before God. What good is a vow if you don't follow through? I guess one's word doesn't have the same weight as it did before.

So, if marriage is no longer permanent or the building block of life, then it is no wonder that people want to expand the definition even further. Marriage has lost all of its meaning within the last 100 years.

It has been difficult to see my friends come out in support of redefining marriage. Some go as far to say that those of us who support traditional marriage are full of hate.

But I have to stand for what marriage really is...a permanent union between a man and a woman that has the potential to create life.