So, about a week ago, I get an e-mail from the person in charge of religious education at my parish. Apparently, the sponsor of one of the young men entering the Church during the Easter Vigil was unable to make it to the service, and she asked if I could be a stand-in. 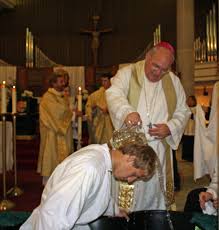 For those of you who may not know, if a chosen godparent or sponsor is unable to attend the Rite, someone can stand in their place as a proxy.

I get up early this morning to attend morning prayer and practice for the Rite this evening. I have never met the young man who I was standing for, but I had met his mother who is also coming into the Church. ﻿I thought that I was just going to stand in as a Confirmation sponsor. However, this young man has not been baptised, so I will also be witnessing his Baptism.

When time came to go over the Rite for Confirmation, I asked him what his Confirmation name would be, since I would be the one announcing it. He did not know, and had to ask his mother. RED FLAG! Um...you don't know who you have chosen to be your patron saint? This is supposed to be a personal decision. Patron saints are not assigned, they are chosen.

I was confused. First off, while I was under the impression that I was just going to be a proxy, I was not certain that was the situation, it was not fully explained to me. So, I cornered Deacon at the end of practice and asked what was going on. Was I a proxy, or was I really going to be the godparent for this kid. Deacon was also not fully aware of the situation, and as we were walking to his office to go over some things, we ran into the woman in charge of it all.

She told us that there was someone who was supposed to be his godparent, but no paperwork was ever submitted and he had never shown up to any of the classes. Also, this kid never did work on his patron saint (apparently everyone is supposed to do a presentation on their saint and why they were chosen). Therefore, I am not just a proxy, I will become his godmother tonight during the Vigil.

Ugh. Deacon rubbed his head in frustration and said, "I just gave this lengthy talk about how godparents and sponsors are responsible for their catechumens. Amelia is not a cupcake. She takes this role seriously and it is difficult for her to take this on if she doesn't know him."

Then he turned to me and said, "Ultimately, it is my responsibility. I am the one who will answer for this when the time comes, but I will get you their contact information so that you can try your best to make sure he is practicing the faith."

Talk about a conundrum. I see a kid who is really just doing what his mother is telling him to do, and doesn't care. But, his mother is a sweetheart, and I feel she is sincere about the faith. If I didn't know that, I would be way more concerned about the whole thing than I am now.

Tonight, he will be Baptized, Confirmed, and will receive his First Holy Communion. The only thing that I can do is pray that the graces that will be bestowed upon him tonight will lead him into a deep relationship with Christ and His Church.

But, I was certainly not expecting this going in...

Saint Cecilia and Saint Bernardine, pray for us!
Posted by Unknown at 2:19 PM