This past week the members of the USCCB met to discus various issues that are abounding in this day and age. It seems that when Cardinal Dolan, the USCCB president, gave his typical address (I think this is something similar to the State of the Union Address...Catholic style), he called for a return to the very basics of Catholicism.

What does this include? Well, first and foremost it includes a return to the Sacrament of Reconciliation. 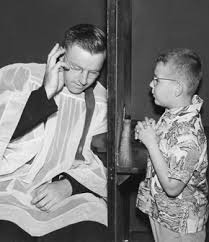 We all should know the graces that come with the regular practice of going to Confession, so this is a great place to start!
But Cardinal Dolan also mentioned one thing that seems to have some members of the Catholic community buzzing: the return to year round meatless Fridays. (Typically, in this day and age  Catholics just abstain from meat on the Fridays during Lent. After Vatican II things were misinterpreted and things changed.)

Surprisingly, there are a lot of people who are very opinionated on this topic. I asked my Facebook friends for their input. I was not surprised to see that most of my Catholic friends already practice the whole meatless Friday thing...my parish is very traditional and conservative...and were in favor of the idea of bringing the tradition back to the forefront. There was also some dissent from a cousin of mine. Don't get me wrong, I love my cousin and he's a great guy with a passion for Christ that I see very clearly, but when it comes to Catholic tradition he doesn't seem to be in favor of the 'old ways'.
Why is that? When I was looking over some other opinions that people were giving on the whole meatless Friday thing, it does seem that opinions are very clearly split between those who like tradition to those who don't like tradition. Things like meatless Friday's bring back pre-Vatican II images of Mass being spoken in Latin and women wearing veils. To some people (my husband being one of them) the thought of going back to those Latin Masses is a nightmare they will do anything in their power to fight. After all, the Catholic Church is modern now...
I think the reason some people do not want to bring back the meatless Friday thing is because they do not understand the tradition and why it was practiced to begin with. Many people thought that eating meat on Friday was a SIN! (I don't think the Church ever officially proclaimed eating meat on Friday to be a sin, only the deliberate failure to perform an act of penance, whether it is abstaining from meat or abstaining from something else, is a grave moral matter and therefore may be a mortal sin...I think I am interpreting that correctly...)

The act of abstaining from something is an act of penance and we are all called to repent. The action of abstaining from meat on Fridays fulfills this obligation. However, the Code of Cannon Law states that if we chose to not abstain from meat on Friday, then we must abstain from something else or take on something for penance. A lot of people forgot that little cliff note. I think that it is because people have forgotten the spirit of abstinence that the bishops are bringing the meatless Friday concept to the forefront.

Why do we have to practice penance? WE ARE ALL SINNERS! Jesus Himself has called for us to repent and the apostles and saints have continued this tradition.

The bishops are also trying to get Catholics to remember their roots and stand out in a society that has turned Godless. This is not to say we are to be hypocritical and have a 'holier-than-thou' attitude, it is a way to show others that as Catholics we believe we are 'in the world and not of the world'.

So, what about those vegetarians who already to not eat meat? Simply, they are supposed to sacrifice something else.

I think this is a great thing the bishops are doing. We as Catholics have forgotten our Catholic identity and it is imperative that we bring it back. Going back to the Sacrament of Reconciliation is a perfect place to start!

On a side note: If I state anything that is contrary to Church teaching it is purely unintentional. I submit myself to the teaching authority of the Magesterium in all matters of faith.

On another side note: My hubby and I completely forgot that yesterday was Friday and we ate meat...
﻿
﻿
Posted by Unknown at 1:08 PM