On Thursday nights I go to Bible Study, I love it! The strange thing is I am having serious problems in my prayer and meditative life, something that I've felt the need to meet with my Deacon about for some spiritual counseling, that should show how serious it is because I don't like taking up Deacon's time, he's an extremely busy man. One would think that a woman who is having serious spiritual problems wouldn't enjoy going to Bible Study, especially if that Bible Study is a Lectio-style study. Divinio Lectio is when you meditate on a specific Bible passage or a passage from another spiritual book and see where the Holy Spirit leads you.
If one is having issues meditating, why on earth would they look forward to a Lectio Bible Study on Thursday nights?

I don't look forward to Bible Study because it is satisfying some kind of spiritual need, though I am hoping that one day it will. I look forward to going for two reasons; the people who go are really cool and I enjoy the fellowship, and I enjoy reading the Bible and listening to people's different takes on the passages that we read.

What does this have to do with mustard seeds? 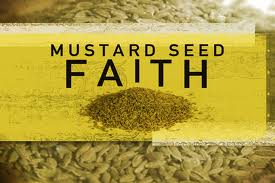 When people think of the Bible and mustard seeds, they probably think of Matthew 17:20, "Amen I say to you, if you have faith the size of a mustard seed, you will say to this mountain, 'Move from here to there,' and it will move. Nothing will be impossible for you." That is not the mustard seed passage that I am referring to, but it is the most popular.

This pass Thursday we read Mark 4: 26-34. This is a different mustard seed passage where Christ likens the Kingdom of God to a mustard seed; small when sown but becomes a large bush/tree when fully grown "...so that the birds of the sky can dwell in it's shade." It's a beautiful image.

After we read the passage the other people in the group start meditating and writing what this passage meant to them and how they can apply the teaching to their lives. Me, on the other hand, I start cross-referencing and reading the footnotes since meditation does not seem to be my forte at the moment. When it came time to share, naturally most people spoke about the reference to the mustard seed. I however, was drawn to verses 33-34, "With many such  parables he spoke the word to them as they were able to understand it. Without parables he did not speak to them, but to his own disciples he explained everything in private."

When Christ spoke to the crowds He used parables, however, He went into more detail with His apostles and this can be cross-referenced with Matthew 13: 34-53. Why did Christ do this? A lot of people want to downplay the role of the twelve and their importance. But these twelve men where Christ's most intimate friends, His inner circle. Just like some kind of brilliant professor, he is going to share his knowledge more indepthly to those who are closest to him.

Christ knew that He would not be on earth forever. He knew that He had to establish a Church that would go on teaching Truth. He gave His apostles a more in depth education so that they could continue teaching the masses. We can see this clearly reflected today! The Catholic Church has something other denominations do not have; Apostolic Succession. 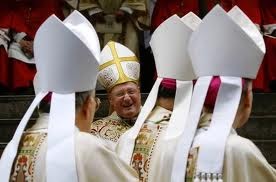 The Catholic Church is a teaching church. The descendants of the apostles are the teachers. The Church has been very solid on Her teachings for a very good reason. There are people out there who think that they know better than the Magesterium. I know that I wrote about Catholics for Choice in my previous post and they are the perfect example of people who think they know better than the descendants of the apostles. The Church does not form her teachings around convenience for the people. Since when were Christ's teachings convenient? 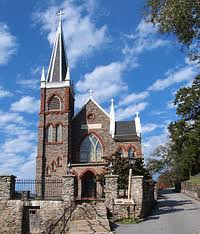 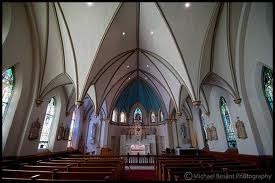 Beautiful church, isn't it? One women I worked with was a cradle Catholic and the other was a convert. Neither knew the history of the Church or the symbolism and they were fascinated when I tried to explain things to them and answer their questions, not only of the church but the faith as well, there was still a lot they did not know. When people ask me how I know these things I simply have to answer that I read...a lot. When we somehow got on to the topic of abortion and contraception the convert got seriously agitated. Even though she converted to the Catholic faith for some reason she could not accept Her teachings on these topics. She was a previous Lutheran, like I was, and I can fully understand that it may take some time and exploration for her to understand these things. I can only hope and pray that she begins to fully realize the the Church she converted to is not just a bunch of really pretty rituals, but it is also comprised of a tightly woven theology that cannot be unwoven. All of the teachings are entwined together, and if you think you can separate them out then you need to seriously re-think that logic.