I was flipping through the channels the other day and I came across a British drama/light comedy show on PBS called 'Call the Midwife'. 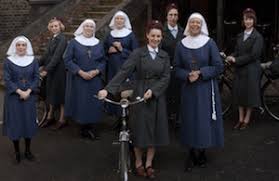 It is apparently based off of an autobiographical book of the same title and it is about a young woman in post-WW2 England who works at a convent/hospital for expectant mothers. It is an Anglican establishment and the sisters have a day to day lifestyle very similar to their Catholic counter-parts.
Naturally, when I watched the first episode, I thought they were Catholic nuns...but when they said their Liturgy of the Hours in English, I realized they must have been Anglican, and after a quick search on the internet, I found I was right. Anglican religious (I mean monks/nuns) started to spring up around the middle of the 19th century. They quickly grew and reached a high point in the 1950's. There are still a number of them around.
Anyway, I quickly fell in love with the show because it tells of the struggles of the young women who work there and the struggles of the nuns who have taken vows.
I am actually thinking about reading the book since the show seems so fascinating.
If you come across this show, I highly recommend it.
Finally, with the Conclave fast approaching, I ask everyone to keep the Cardinals, and the retiring Holy Father in their prayers!﻿
Posted by Unknown at 1:42 PM