Yup, you guessed right, I endured the freezing cold and snow to join the other 500,000+ people in demanding that our country respect the dignity of women and ALL human life last week. It was the second Right to Life March that I had the unfortunate honor to attend.

But, despite the fact that we are all there to protest this travesty called legalized abortion, there is still a sense of unity among everyone who marches. We are all united for this one cause, and in the end you come away with at least a small feeling of accomplishment.

Like last year, I chaperoned a group of teenagers from my church. We drove down on Thursday night and attended the Mass at the Basilica. Let me tell you, it was a LONG Mass. The procession alone was like 45 minutes! But it is such a beautiful Mass and totally worth it! Then we spent the night sleeping on the gym floor of Catholic University...this means that I only got about an hour of sleep before I had to wake up all of the girls at 4:30am. 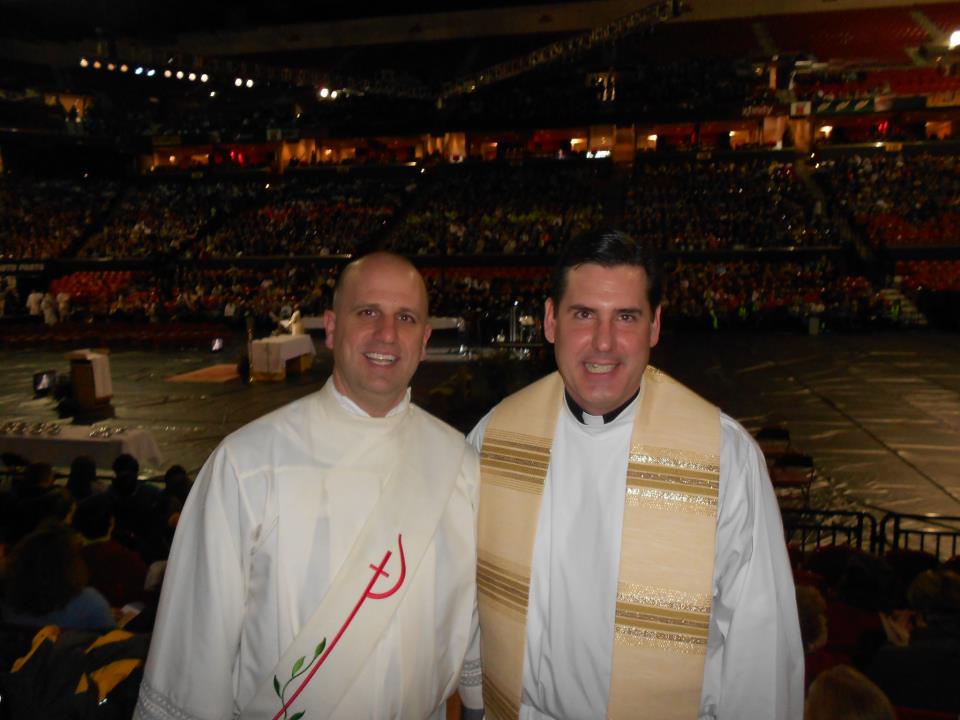 That's Deacon Dave and Msgr. Hudock you see pictured there. Deacon Dave is my spiritual director and he is vehemently Pro-Life and not afraid to shout about it! The Youth Rally hosts thousands of young Catholics. They sing songs and celebrate Mass before hitting the streets. It's a lot of fun and very inspiring.

One thing that I have discovered about myself is that I have this strange emotional reaction to this one song that seems to be very popular. I remember singing it when I was in middle school and high school, but it did not have the same effect on me as it does now.

﻿
﻿Here I am, Lord...I know we all have heard it. For some reason, every time I hear this song, I literally cannot stop the tears streaming down my face. So, here I am, surrounded by teenagers, trying to be the 'cool chaperone' (and failing miserably), and I am bawling during the processional at a Youth Rally. Yup, my coolness went out the window.

Not that I was cool to begin with. One thing I realized during this who experience is how out of touch I am with the current generation. I'm not even 30 and I'm feeling like an old fuddy-duddy. All of us chaperons were trying hard to allow them to have a certain amount of fun, but not forget that we were pilgrims and there had to be a prayerful and educational aspect as well.

When I got home, and I looked at my Facebook account, I saw so many pictures of all of my friends who attended. Again, this is such a great feeling. We were united in a common cause. Yet, it is unfortunate that we have to fight for such a fundamental human right.