Yes, I have been very quiet these past four months on the blogosphere, but I have been very busy elsewhere. Classes are keeping me busy this final semester and I will be eternally thankful when May 5th comes around (That's graduation day!). I've also been very active in the world of Facebook and writing letters to various people and organizations.

I am not going to write this blog post about the HHS mandate. EVERYONE in the Catholic world knows about it and it has been the main topic ever since January 20th. My views are obvious; I am vehemently against it, and I have been writing to everyone I can think of expressing my opinion in this matter. I have also been vigorously defending my views and the Catholic faith on the social networks. I believe that the topic has been exhausted and I have nothing new to add to the debate. At least at this point in time.

These past few months have actually been a little disheartening. Listening to people bash my faith has almost made me lose heart. And the fact that there are so many people out there who identify as Catholic yet don't understand why the Church teaches what she teaches proves beyond a doubt that we are reaping the results of a self-inflicted wound. Granted, I did not go to CCD when I was a kid because I attended Catholic school, but the teachings about things like contraception and homosexuality need to be pressed more in Catholic education. Priests need to address it from the pulpit, CCD teachers need to talk about it in Confirmation classes, seminars need to be offered to educate the Catholic population, and it must be a requirement in Pre-Cana classes. The reason why 85% of Catholics (Don't let the faux White House statistics fool you) don't find anything wrong with contraception is because they have not been fully taught and they are falling prey to society's secular views.

I have had to stand firm in my faith these past view months and openly express my beliefs to show the world that there are strong Catholic women who practice their faith. We cannot be silent any more. The secular world wants the faithful to worship in private and not bring their faith to the public sphere. Listen to the wording the Obama Administration uses: Freedom of worship. They're saying 'Yeah, you can worship however you want, just don't practice your faith publically'. 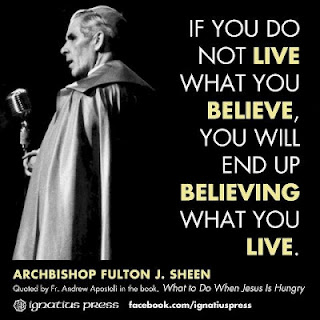 This is where I had to make a stand. I've gotten into some long debates, some civil, some not, and I've lost some friends over it. But, when someone refuses to hear the Word, sometimes you have to shake the dust from your sandals and move on.

I became so disheartened that I actually decided to give up Facebook for Lent. I was spending too much time online that I felt I was neglecting my prayer life. My husband did not agree with my giving up Facebook because he thought that my evangelizing the culture was a good things, and that I was doing God's work. However, our Deacon agreed with me and said that taking this time for prayer and reflection would be beneficial.

I'll admit, giving up Facebook has been harder than I thought. I never realized that it is how I keep up with my family and friends as well as how I keep up with the news. Yes, I actually get most of my news from Facebook! I'm not sure if that is a good thing or a bad thing.

I am using the extra time to catch up on school work, and do things like read the Bible, pray, and learn more about my faith. That is what Lent is about: penance and prayer. But, when Sunday's come around I am back on Facebook catching up with friends and making sure everyone knows where I stand on issues. Gotta love Sunday's!