I get very excited when Natural Family Planning Awareness week comes around! It gives me an excuse to actively promote NFP and all of its benefits. Don't get me wrong, I promote NFP all of the time, but now I have a good reason to push NFP for an entire week straight! 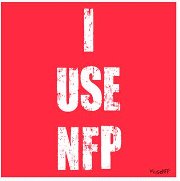 I always like to tell people why the hubby and I practice NFP, and I think that NFP Awareness week is a great opportunity to share our conversion story.

I went on the pill when I was 16, but not because I was sexually active. I went to the doctor because I suffered debilitating cramps during my period. These cramps were so severe that I could not get out of bed the first day or two of my cycle. Naturally, the doctor put me on the pill. And it helped...for a little while. When the pills stopped working, I stopped taking them.

When I was 13 I converted to Catholicism and considered myself to be a 'good Catholic girl'. But in reality, I wasn't. Yes, I was a goodie-two-shoes who always followed the rules during my Catholic school days, but I did not agree with the Church on two things; homosexuality and birth control. The reason I did not agree with the Church's stance on birth control was because I did not think that NFP could work, and people had to have the ability to plan their family.

I remember being 17 years old, a senior in high school, and our priest, Father Bateman taught a section on marriage. He spent a whole class talking about NFP. While I respected Father Bateman, I still scoffed at him in my mind thinking, 'What do men know about a woman's body? NFP doesn't work'.

Simply, I was wrong. As time went on, and I graduated from high school and continued my education at Mount Saint Mary's University, another Catholic institution. Even though I was surrounded by a strong Catholic influence, I still fell away from the Church, and my deep plunge began around my junior year, when I actively began practicing Wicca.

I met the future hubby as I was going into my senior year of college. When we became sexually active, I went back on the pill, for obvious reasons. For many years we lived that life. In 2008 we moved to Harpers Ferry, West Virginia. Our apartment was a 30 second walk away from Saint Peter's Roman Catholic Church and it got to the point where I could not ignore the nagging voice in the back of my head insisting that I return to church. One Sunday morning, I made the trek up the hill. I kept going back, and eventually Rick began to make the trek up the hill with me.

Soon the spark that was planted in our hearts grew into a fire and we became active Catholics. We went to Mass every Sunday and began studying our faith with a passion. I have learned more about my faith since our reversion than I did in all 10 years of Catholic school.

I came to a point in my spirituality that I realized that Catholicism is not a cafeteria religion. Christ built his Church on Peter, the Rock, and gave him the Keys to the Kingdom. What ever he bound on earth was bound in heaven and vice versa. If I believed that Christ established his Church on Peter and Peter's descendants, and that Christ sent the Paraclete to guide His Church, like He promised, it is an all or nothing deal. Therefore, I could not continue on picking and choosing what I wanted to follow. I had to actively practice my faith, ALL aspects and teachings of my faith.

I was going through a period of spiritual darkness (something I am still going through), so I made an appointment with my Deacon for some advice and also to talk about marriage to Rick. Deacon helped me in so many ways and encouraged Rick and I to abstain from sex until our marriage and he gave me the name of an NFP instructor.

Needless to say, Rick wasn't the happiest with that idea. Going months without having sex is a big sacrifice. But he knew that I was very serious about being celibate until we could get married. He also was unsure about me throwing the pill pack away and practicing NFP. Like me during my high school years, he wasn't sure if NFP was actually an efficacious way to plan a family. Even though he had doubts, he knew that this was very important to me.

I met with an NFP instructor and began charting my cycles. Using the Creighton Method I was able to see the predictable pattern that my body moved through during my cycles. Maybe there was something to this NFP thing after all. I could tell when I was fertile and when I was not fertile. I also began to appreciate the genius of God, He created woman with a natural family planning system, all we had to do was understand it.

When Rick and I finally got married we used NFP to avoid pregnancy, because Rick wanted to make sure that I got through graduate school. Now, we have stopped actively avoiding and are trusting God to 'plant the seed' in His own time.

Going through this path of discovery has given me a greater appreciation of what sex really is. Sex was created for two purposes: love and life. You can't have one without the other. Taking the ability to create life from the sexual act defiles it. Now a days people treat sex like dirty common thing to be used for their own pleasure, or advantage. Society has defiled sex and the Church puts it on a pedestal. Have you actually read Humanae Vitae? It's good reading and I would highly recommend it. Since it is NFP Awareness Week, why don't you check it out?